Candidates should understand the implications of virtualization and cloud computing on a Linux guest system.

Virtual machines (VMs) are simulated computers. You can use Virtual Machines to create new computers on top of your running machine and install new OSs there. In some cases, it's also possible to run only parts of an OS on top of the current OS; This is called having containers.

To check and see if your host operating system / CPU, supports using hypervisors check for the vmx (for Intel CPUs) or svm (for AMD CPUs) in your /proc/cpuinfo in flags.

You may need to turn the hypervisor option On using your BIOS or UEFI.

Based on your CPU you should have kvm or kvm-amd kernel modules loaded.

If you see hypervisor in your /proc/cpuinfo it means that you are inside a virtualized Linux machine :)

Now, let's see the 2 types of hypervisors. First type 2, since it's easier to understand. 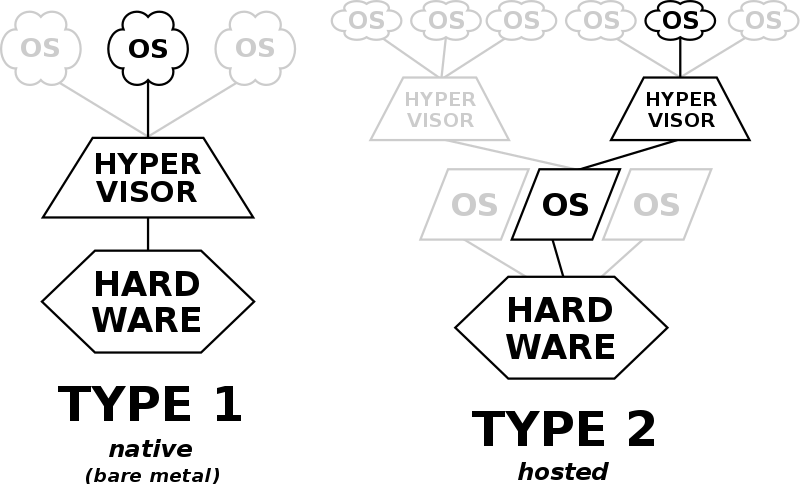 In other words, a type 2 hypervisor is the software between the guest and host. It completely runs on the host OS and provides virtualization to the guest.

Two of the most famous Type 2 hypervisors are VirtualBox (from Oracle) and VMware.

Some of the most famous Type 1 hypervisors are KVM, Xen & Hyper-V. KVM is built-in since Linux Kernel version 2.6.20.

First, create the machine itself. We tell the hypervisor this machine how much RAM/disk/CPU/... needs and set a name for our machine. Then we need to install the guest OS. This can be done using:

You may need to install some guest drivers or additions to help your hypervisor to have better control over your guest machine. These might include graphical drivers for VirtualBox or scripts to help VMWare to control a guest machine or check its status.

Some configurations are machine specific. For example, a network card's MAC address should be unique for whole the network. If we are cloning a machine or sometimes creating them from templates, at least we need to change these on each machine before booting them:

Some configs might be empty on templates, do not forget to fill them too.

In previous sections, we were dealing with complete guest OSs. But is also possible to virtualize only parts of an OS; This is called OS-level virtualization.

OS-level virtualization is an operating system (OS) paradigm in which the kernel allows the existence of multiple isolated user-space instances, called containers.

This can be done to run an application or a service or even run most parts of a new OS for test purposes.

As the name implies, Infrastructure as a Service or IaaS means offloading parts of your infrastructure to other companies. This means buying services like electricity, cooling, and even running hypervisors to another company and just renting your VirtualMachine from them. This makes your life easier because things like "Adding New Hards" now only mean paying a bit more for more HDD on your machine; Instead of buying HDDs and installing them, ... This is called cloud! You might even be able to move your machine from one continent to another one just with one click.

Different cloud providers might provide different levels of Infrastructure or services. These are some examples:

There are programs like cloud-init which help you initialize your cloud machine with ease. This service can help you start machines based on templates on AWS, Azure, Digital Ocean, and others with ease.