Description: Candidates should be able to design a disk partitioning scheme for a Linux system.

Like any contemporary OS, Linux uses files and directories to operate. But unlike Windows, it does not use A:, C:, D:, etc. In Linux, everything is in *one big tree, starting with / (called root). Any partition, disk, CD, USB, network drive, ... will be placed somewhere in this huge tree.

This might be your enlightening moment in your Linux journey. Understanding Filesystem Hierarchy Standard (FHS) can help you find your programs, configs, logs and ... without having prior knowledge about them. This is standard and the latest revision is for 2015.

In the Linux world, devices are defined at /dev/. First SATA or SCSI disks you will have /dev/sda, For newer NVME drives you can see /dev/nvme0 and partitions are available as /dev/nvme0n1, and for the 3rd PATA (super old) disk you will see /dev/hdc, also for SD/eMMC/bare NAND/NOR devices you will have /dev/mmcblk0 and partitions are seen as /dev/mmcblk0p0.

You have to PARTITION the disks, that is create smaller parts on a big disk. These are self-contained sections on the main drive. OS sees these as standalone disks. We call them /dev/sda1 (first partition of the first SCSI disk) or /dev/hdb3 (3rd partition on the second disk).

BIOS systems were using MBR and could have up to 4 partitions on each disk, although instead of creating 4 Primary partitions, you could create an Extended partition and define more Logical partitions inside it.

Note: an Extended partition is just an empty box for creating Logical partitions inside it.

UEFI systems use GUID Partition Table (GPT) which supports 128 partitions on each device.

If you define an extended partition on a BIOS system, that will be /dev/sdx5 (1-4 for primary, and the first extended will be 5).

Linux systems can mount these partitions on different paths. Say you can have a separated disk with one huge partition for your /home and another one for your /var/logs/.

The newer GUID Partition Table (or GPT) solves these problems. If you format your disk with GPT you can have 128 primary partitions (no need for extended and logical).

Note: parted does not understands GPT

A graphical tool for managing disks and partitions. 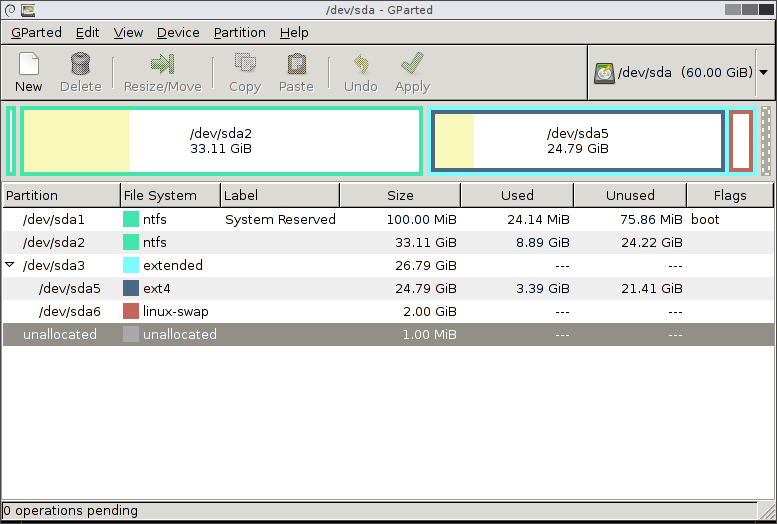 In many cases, you need to resize your partitions or even install new disks and add them to your current mount points; Increasing the total size. LVM is designed for this.

LVM helps you create one partition from different disks and add or remove space to them. The main concepts are:

Disk layout and allocation partitions to directories depend on your usage. First, we will discuss swap and boot and then will see three different cases.

Swap in Linux works like an extended memory. The Kernel will page memory to this partition/file. It is enough to format one partition with swap file system and define it in /etc/fstab (you will see this later in 104 modules).

Note: There is no strict formula for swap size. People used to say "double the ram but not more than 8GB". On recent machines with SSDs, some say "RAM + 2" (Hibernation + some extra ) or "RAM * 2" depending on your usage.

Older Linux systems were not able to handle HUGE disks during the boot (say Terabytes) so there was a separated /boot. It is also useful to recover broken systems or even you can make /boot read-only. Most of the time, having 100MB for /boot is enough. This can be a different disk or a separated partition.

This partition should be accessible by BIOS/UEFI during the boot (No network drive).

On UEFI systems, there is a /boot/efi mount point called EFI (Extensible Firmware Interface) system partition or ESP. This contains the bootloader and kernel and should be accessible by the UEFI firmware during the boot.

On a desktop computer, it is good to have one swap, one /boot, and allocate all other space to / (root).

On servers /boot is still local and based on usage, /home can be local or network. In many cases, we separate the /var because logs and many other files are there and being updated so it is good to separate it or even put it on more advanced storage (like RAID disks to prevent data loss). Some people also separate the /usr and write-protect it (read-only file systems) or even mount the /usr from the network so they can change/update one file on the network storage and all the servers will use the new file (You remember? /usr contains important executables like Apache webserver).

Here I'll review the 3 different methods to add a swap to your OS. We will have a look at 3 different distros: